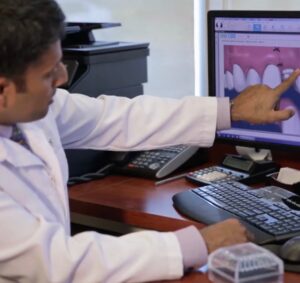 According to a study that was done in 2021, mental health and heart disease conditions are increased in people with gum disease. The research was done at the University of Birmingham’s Institute of Applied Health Research.

Background: The University of Birmingham study examined over 64,000 patients that had a history of periodontal disease. These records where then compared to 251,161 patients who had no record of gum disease. The average age of the patients was 44 years old; 43% of them were male; 30% smoked and the ethnicity of each the patients was mostly the same.

The study tried to establish how many of the patients with gum disease and without it end up developing cardiovascular diseases like stroke, heart failure, vascular dementia, high blood pressure, diabetes, arthritis, psoriasis, depression, anxiety and serious mental illness. They followed up on the health of these patients every 3 years on average.

The Results of the Study

The research showed that dental patients with a history of gum disease when the study started later developed one of the additional conditions over an average of three years. The patients without gum disease at the beginning of the research did not follow the same pattern.

Patients with a recorded history of periodontal disease had an increased risk of developing:

They also found that poor oral health is extremely common worldwide and that as a person’s oral health starts to decline, their quality of life substantially declines too.

One of the Largest Studies of its Kind

Until this study, there was a lot of speculation between the connection with oral health and other systemic and/or chronic illnesses—most especially including mental health. Because of the lack of data, the researchers decided to perform one of the biggest epidemiological studies of its kind to date. They found overwhelming evidence that gum disease is associated with an increased risk of developing an array of chronic diseases and these risks may add a substantial burden on public health.

The study’s co-senior author Professor Krish Nirantharakumar said: “An important implication of our findings is the need for effective communication between dental and other healthcare professionals to ensure patients obtain an effective treatment plan […] to improve their existing overall health and reduce the risk of future illness.”

It’s very clear from this study that dental professionals need to be very vigilant when they are looking for early signs of gum disease so as to mitigate any potential implications to a patient’s overall systemic or mental health. Patients also need to ensure they are regularly seeing their dentist and optimizing their oral health as much as possible.

After Dr. Modi graduated from McMaster University with an Honours B.Sc. in chemistry in 1997, he received his Doctorate of Dental Surgery from the University of Toronto in 2001. He began to practice dentistry in Brantford the following year. Throughout his career he's completed hundreds of hours of continuing education programs and has studied with some of the best educators in the industry.